The reasons why you should choose Mauritius for business

In addition to being an internationally renowned tourist destination, Mauritius has built itself a solid reputation as a reliable and secure financial centre. Indeed, there are many good reasons to choose Mauritius for business and relocation.

Mauritius is a business hub for the region and an essential platform for international trade. Many factors can prove it. The Mauritian government has put in place favourable incentives and a business-friendly ecosystem to encourage foreign direct investment as well as institutional investors.

Several foreign companies, including more than 170 of French origin and mainly SMEs and entrepreneurs, chose to carry out their business activities from Mauritius. These companies, which employ about 13,000 Mauritian and foreign employees, are active in areas such as subcontracting, IT services, distribution, and tourism amongst others. With more than EUR 110 million of investment in 2017, France is in first position ahead of South Africa, the United Kingdom, Luxembourg, Belgium and Switzerland in terms of Foreign Direct Investment (FDI) flows.

Although the French favour the island, many other nationalities have come to Mauritius in recent years (as we can see in the graph above). So why is Mauritius a great place for entrepreneurs?

The banking system became stronger over the years and now boasts about 20 banks, both local and international. The insurance business and the wealth management market are growing rapidly. The Stock Exchange of Mauritius is an attractive platform for raising capital and listing for both local and international issuers. It is also one of the few stock exchanges in Africa to offer a multi-currency listing, and to be open to dual-currency trading.

Mauritius has also made significant progress in the Information and Communication Technologies (ICT) and Business Process Outsourcing sectors. In addition, the country’s economic activity extends to several other areas such as construction (including luxury residences for local and international customers), free port activities, medical tourism, and education with the presence of private international schools and universities (French and English-speaking). 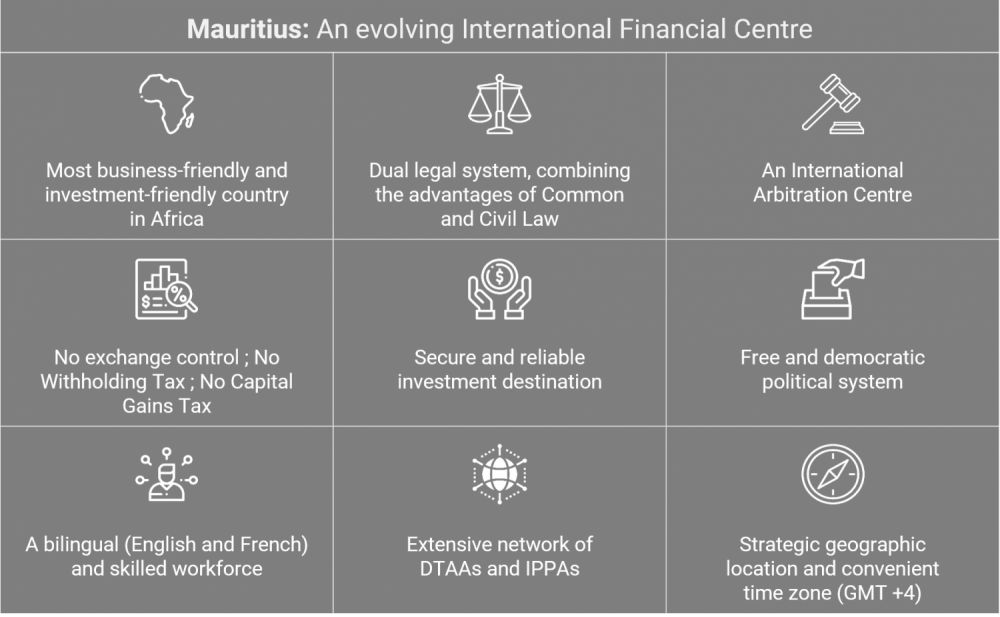 There are many reasons for entrepreneurs to choose Mauritius. The island ranks first among African countries in several areas, including ease of doing business, political and social stability, good governance, economic freedom and ICT development. Owing to its strategic location between Africa and Asia, the country is an increasingly attractive destination for foreign investors and is the perfect platform to invest in both regions.

In addition to its diversified economy, the Mauritian International Financial Centre also combines other elements such as its robust and hybrid legal system (common law and civil law), its international arbitration centre, and its bilateral and multilateral relations. Indeed, Mauritius has concluded several Double Taxation Avoidance Agreements (DTAAs) and Investment Promotion and Protection Agreements (IPPAs) with nearly 50 countries. It is also part of several international communities, including the Southern African Development Community (SADC), the Common Market for Eastern and Southern Africa(COMESA), the African Growth and Opportunity Act (AGOA), the Indian-Ocean Rim Association (IORA) and the Indian Ocean Commission (COI).

The Bank of Mauritius and the Financial Services Commission regulate and supervise the banking and non-banking financial services sector. Anti-Money Laundering/Combating the Financing of Terrorism (AML/CFT) laws are strict. Mauritius fully supports international initiatives such as the Financial Action Task Force (FATF-GAFI) and the OECD – which classifies Mauritius as ‘Compliant with global tax laws’, and is a member of the Anti-Money Laundering Group for Eastern and Southern Africa (ESAAMLG).

Other financial benefits include the absence of exchange controls, capital gains tax and withholding tax.

Mauritius provides a favourable environment for companies and individuals who wish to do business in and from the island. For entrepreneurs and their family, it offers clear advantages in terms of climate, security, access and health, and offers an ideal living environment for those who wish to relocate to Mauritius. The island also ranks first in Africa for quality of life, according to Mercer’s international survey.

Stable political, economic and social environment; the island is an example of peace and social unity in a multicultural landscape. Indeed, the population comes from the European, African and Asian (India and China) continents. The island also offers several activities such as excursions, trails, water sports, scuba diving, skydiving, horse riding by the sea and many more. You will be able to enjoy the beautiful beaches and a sumptuous and breath-taking nature. You will not be disoriented! You will still have a wide choice of international brands and products in the various shopping centres and supermarkets.

We use cookies on our website to give you the most relevant experience by remembering your preferences and repeat visits. By clicking “ACCEPT ALL”, you consent to the use of ALL the cookies. However, you may visit our "Cookie Settings" to provide a controlled consent.
Cookie SettingsREJECT ALLACCEPT ALL
Manage consent

This website uses cookies to improve your experience while you navigate through the website. Out of these, the cookies that are categorized as necessary are stored on your browser as they are essential for the working of basic functionalities of the website. We also use third-party cookies that help us analyze and understand how you use this website. These cookies will be stored in your browser only with your consent. You also have the option to opt-out of these cookies. But opting out of some of these cookies may affect your browsing experience.
Necessary Always Enabled
Necessary cookies are absolutely essential for the website to function properly. These cookies ensure basic functionalities and security features of the website, anonymously.
Functional
Functional cookies help to perform certain functionalities like sharing the content of the website on social media platforms, collect feedbacks, and other third-party features.
Performance
Performance cookies are used to understand and analyze the key performance indexes of the website which helps in delivering a better user experience for the visitors.
Analytics
Analytical cookies are used to understand how visitors interact with the website. These cookies help provide information on metrics the number of visitors, bounce rate, traffic source, etc.
Advertisement
Advertisement cookies are used to provide visitors with relevant ads and marketing campaigns. These cookies track visitors across websites and collect information to provide customized ads.
Others
Other uncategorized cookies are those that are being analyzed and have not been classified into a category as yet.
SAVE & ACCEPT

You have a request? Drop it here: