In its latest countrywide evaluation, Moody’s Investors Service has maintained its Baa1 credit rating for Mauritius. Moody’s highlight that the island’s upper-middle income and diversified economy, economic development policies and stable political environment are factors that sustain its credit profile.

“Resilience and diversification of the local economy, and robust institutional capacity” has helped Mauritius maintain its favourable rating, in spite of the small size of its GDP (USD 13.34 billion in 2017). In contrast, the island nation’s “relatively high government debt burden” and dependence on its “large and complex financial sector” constitute risks, particularly in terms of balance of payments.

Mauritius is one of the three smallest economies to receive a Baa1 rating. As a “highly open economy”, the island nation ranks fifth among the countries most open to trade. Mauritius is thus ahead of Hungary, Slovenia, Bulgaria and Thailand.

In the Economic Strength sub-category, Mauritius receives a “High (-)” rating. The economy’s level of wealth allows it to absorb external shocks, according to Moody’s. Analysts also note the policy of restructuring the traditional pillars of the economy and promoting new sectors of activity. This explains why Mauritius’ economic growth has so far been higher than other countries also rated Baa. Moody’s expects this trend to continue over the next two years.

Continuing on the strengths of the local economy, Moody’s highlights the importance of the tourism industry for growth. While the sector had experienced double-digit growth in 2014 and 2015, it grew by only 4.3% in 2018.

It thus places Brexit and the slowdown in the French economy as the main causes of the sector’s weaker performance. The report also identifies vulnerability to climate change as one of the main threats to the industry. Even if the government “has undertaken a number of efforts to enhance infrastructure resiliency to climate-related events”. Moody’s also notes the government’s efforts to strengthen its economy. In particular, through its “ambitious” public investment plan in transport, the port and energy, as well as through the negotiation of trade agreements with China and India.

The report also highlights that Mauritius has been flexible to international pressure in relation to its global business sector. In particular by replacing its “foreign tax credit system” and signing several international conventions to make its financial centre more transparent and impermeable to tax evasion.

Mauritius obtains a High (+) rating in institutional strength. Indeed, based on the country’s good performance in the latest Doing Business ranking, economic governance is strong. However, Moody’s notes that “public governance is not as strong as economic governance”. The heavy bureaucracy that is becoming a “problematic factor” for the competitiveness of the economy, the report points out, explains this. 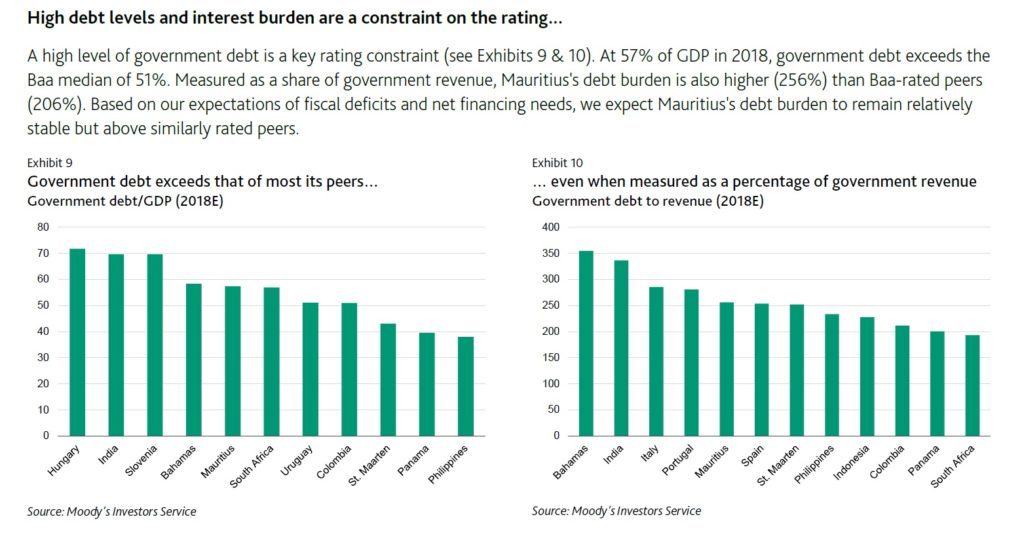 Addressing Mauritius’ weaknesses, Moody’s places high public debt as the most significant factor in the country’s rating.While Mauritius performs well in previous indicators, compared to other countries with similar ratings, the country’s debt performance is below average. Thus, the ratio of public debt to both gross domestic product (GDP) and government revenue is higher in Mauritius than in other Baa rated countries. However, the report states that the structure of public debt partially mitigates the risk.