How can global corporate structuring benefit your business when going global?

We often hear about companies (public and private) making important investments globally, especially for large public companies. According to a recent Deloitte’s global survey (based on almost 1,900 private-company leaders across 30 countries), private companies and SMEs have international presence at the heart of their strategy, with about 70% of them depending on international markets for some of their revenue.

Why do companies go global? Why is it important to structure your investments in specific jurisdictions while establishing your international presence? Why is Mauritius the right platform to help you achieve your business objectives?

What is global corporate structuring?

Companies decide to establish an international presence to find new customers, reduce their costs of operations and increase their income, and in the wake of political and economic uncertainty in their home country in some cases. It is not that easy however. Global corporate structuring present many opportunities but also numerous challenges, including investment protection and fiscal uncertainty. In consequence, global corporate structuring requires a careful consideration of the vehicle best suited to structure the investment. It is also about selecting the most appropriate jurisdictions to set-up this vehicle.

For international companies for instance, global corporate structuring can take the form of choosing the most favourable jurisdiction for different entities that operate under the same umbrella, the holding company. For these companies, it plays a major role in financial planning. Indeed, a dexterous structuring for international companies either doing investment holding, trading, leasing, providing financial services among other activities, can lead to significant benefits. These include:

Many countries have developed expertise within their region and are now reputed jurisdictions for transaction structuring. For Africa, no one would deny that Mauritius has emerged as the preferred destination for the domiciliation of various types of financial and non-financial activities when structuring their activities. The country has become a natural channel for growth in the emerging Africa and Asia trade corridor.

China, leaping ahead European Union countries and the United States in Africa

Couple of weeks ago, we witnessed the importance of this trade corridor, with the Forum on China-Africa Cooperation (FOCAC) held in Beijing. The forum brought 52 African countries and China together for cooperation, and covered various aspects of protocol, trade and economy.

While China’s level of Foreign Direct Investment (FDI) is relatively low (5% of total FDI inflows in Africa), the country is one of the Africa’s largest economic partner. Indeed, over the last 20 years, trade has grown by 40 times and today amounts around USD 200 billion. A McKinsey study also reports that there are over 10,000 Chinese-owned firms operating in Africa, of which 30% are involved in manufacturing, 25% in services, around 20% in trade and 20% in construction and real estate and 5% involved in other sectors.

The funds will be invested in projects aligned to the Chinese government’s Belt and Road Initiative. These include sectors such as telecommunications, infrastructure, seaports, energy, and human capacity development amongst others.

In comparison, trade between the European Union (EU) and African countries exceeds USD 300 billion. Moreover, during the fifth EU-Africa Summit that took place in Abidjan last year, the EU pledged to make more than USD 54 billion available to Africa for sustainable investment by 2020.

With USD 54 billion of FDI stock, the United States (U.S.) is the largest investor on the continent. Over the past five years however, trade between the two continents has fallen to USD 39 billion in 2017, from USD 100 billion in 2008, because of Trump administration’s “America First” policy.

On a global scale, although Foreign Direct Investment (FDI) fell by 23%, from USD 1.87 trillion in 2016 to USD 1.43 trillion in 2017, growth and trade have increased. While investments flows to developed countries fell by 37% to USD 712 billion, 47% (USD 671 billion) of the total FDI were directed towards developing economies, namely Asia, Africa, and Latin America and the Caribbean.

However, we can see that there is an increasing number of African countries investing in Africa. Indeed, The Africa Investment Report 2017 has found that African companies accounted for 9% of the capital invested, announcing 93 projects worth USD 8.5 billion. In terms of projects, Western European (224, worth USD 12 billion) and Asia-Pacific (126, worth USD 50.8 billion) countries precede Africa.

Intra-Africa trade (of goods), at 10 to 12% of total trade a decade ago, now stands at around 23%. COMESA-EAC-SADC Tripartite region accounts for 72% of intra-Africa trade. The continent is the first export market for the tripartite region and several other countries. On the over hand, trade in services contribute to more than 50% of African economies. According to the McKinsey’s Lions on the Move 2016 report, consumers and businesses spending stood at USD 3.9 trillion, and is projected to rise to USD 5.6 trillion by 2025.

Its wide network of treaties (Double Taxation Avoidance Agreements and Investment Promotion and Protection Agreements) and business friendly ecosystem make Mauritius a preferred platform between the western countries and Africa, but also between emerging Asian countries and Africa. As a leading International Financial Centre (IFC) of repute and substance, Mauritius is an attractive jurisdiction for firms looking to benefit from opportunities on a global scale. In addition, the establishment of foreign law firms (through local offices or joint ventures alongside Mauritian lawyers) has encouraged investor confidence in the market. The country is also positioning itself as an International Arbitration Centre. In addition, Mauritius is a member of major regional organisations – such as the African Union, Southern African Development Community (SADC), the Common Market for Eastern and Southern Africa (COMESA) and the Indian Ocean Rim-Association for Regional Cooperation (IOR-ARC) – and benefits from preferential access to African markets.

With all these factors, and there are much more, it is easy to understand why an investor (European, Asian, or African) would choose Mauritius to structure his investment in Africa. We also see an increasing number of African investors and business people selecting Mauritius to structure their investments. This is particularly true in countries where there is political instability and risks of expropriation of assets for instance.

Figure 2. Origin and destination country of investments of companies operating from the Mauritius IFC for July 2018 (%) 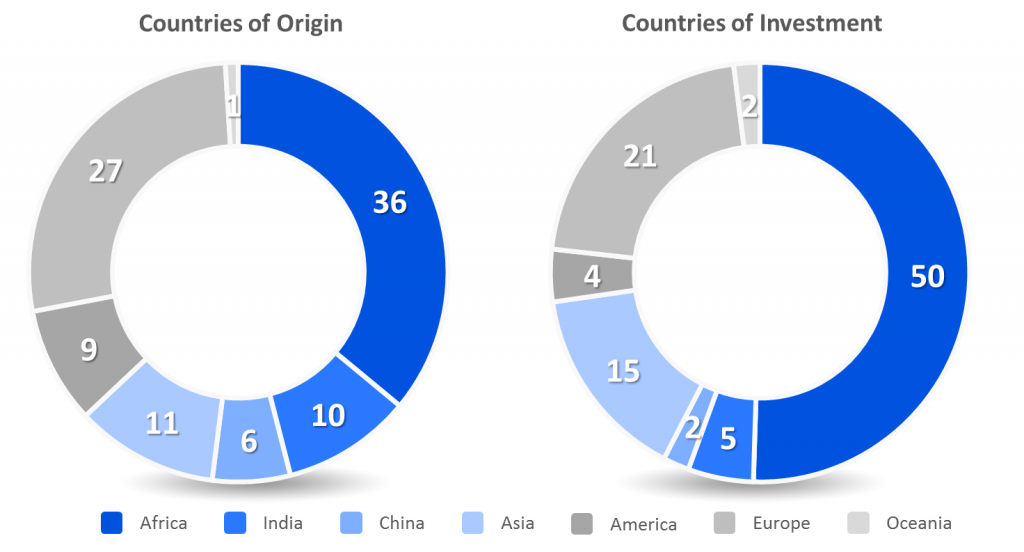 There are many changes happening in global business landscape however. While many investors and countries are increasing their interests towards Africa, it is crucial for international companies who are expanding to be careful when structuring their investment across borders. A new tax structuring landscape is rapidly shaping as more and more countries are adopting the Organisation for Economic Cooperation and Development’s recommendations following the issue of the final Base Erosion and Profit Shifting reports.

Mauritius is among the first signatories of the ‘Multilateral Competent Authority Agreement on the Exchange of Country-by-Country Reports’ of the Organisation for Economic Cooperation and Development in June 2015. This approach reflects the will of the Mauritian government to promote the country as a transparent IFC that not only ensures the security of corporate assets, but also attracts capital flows in a transparent way; and to ensure that the Mauritius IFC remains the preferred destination for cross-border business with the African continent. 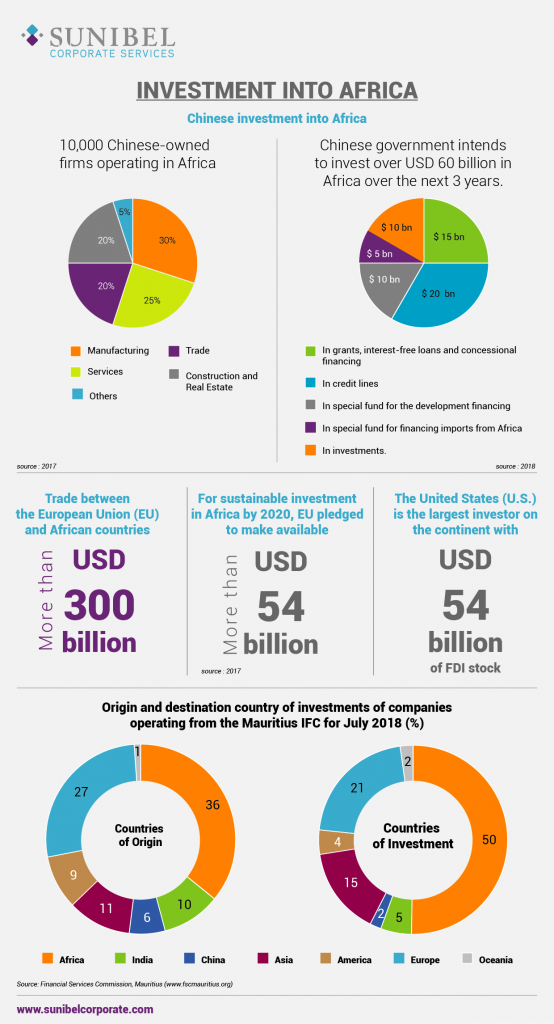 We use cookies on our website to give you the most relevant experience by remembering your preferences and repeat visits. By clicking “ACCEPT ALL”, you consent to the use of ALL the cookies. However, you may visit our "Cookie Settings" to provide a controlled consent.
Cookie SettingsREJECT ALLACCEPT ALL
Manage consent

This website uses cookies to improve your experience while you navigate through the website. Out of these, the cookies that are categorized as necessary are stored on your browser as they are essential for the working of basic functionalities of the website. We also use third-party cookies that help us analyze and understand how you use this website. These cookies will be stored in your browser only with your consent. You also have the option to opt-out of these cookies. But opting out of some of these cookies may affect your browsing experience.
Necessary Always Enabled
Necessary cookies are absolutely essential for the website to function properly. These cookies ensure basic functionalities and security features of the website, anonymously.
Functional
Functional cookies help to perform certain functionalities like sharing the content of the website on social media platforms, collect feedbacks, and other third-party features.
Performance
Performance cookies are used to understand and analyze the key performance indexes of the website which helps in delivering a better user experience for the visitors.
Analytics
Analytical cookies are used to understand how visitors interact with the website. These cookies help provide information on metrics the number of visitors, bounce rate, traffic source, etc.
Advertisement
Advertisement cookies are used to provide visitors with relevant ads and marketing campaigns. These cookies track visitors across websites and collect information to provide customized ads.
Others
Other uncategorized cookies are those that are being analyzed and have not been classified into a category as yet.
SAVE & ACCEPT

Choose investment-friendly Mauritius and unlock the potential of your business

Your have a request? Drop it here: