Corporate re-domiciliation: why & how to relocate your company to Mauritius

In the corporate world, growth is the watchword. While you devise strategies to achieve it, you may not found growth on home soil. Shifting countries can therefore open doors to numerous business opportunities. Many companies have chosen to come to Mauritius for business purposes. As at 1st January 2018, there were over 11,000 foreign companies (and close to 1,000 global funds) registered in Mauritius.

You are the owner of a foreign company and want to enhance the value of your company? You would want to take your business global? Mauritius is the smart move for your corporate re-domiciliation.

What is corporate re-domiciliation?

Like relocation (for individuals) which involves taking up residence in another country, corporate re-domiciliation is the process of transferring a company’s registration from one jurisdiction to another. It is different from the setting up of an overseas branch or a subsidiary in a foreign country. For instance, by setting up a branch in Mauritius, the foreign company remains principally regulated by the laws of its home country.

However, when choosing to re-domicile your company in Mauritius, you are changing its status from a foreign to a Mauritius-registered company. The new Mauritian company is now subject to the Mauritius law and governed under the Companies Act 2001.

Why choosing to re-domicile your company?

Companies choose to re-domicile from one country to another for multiple reasons. It may include changes to regulations such as tax rate, or if the presence of the foreign company in its home country is not sustainable anymore.

The easiest option to re-domicile your company is to incorporate a new one in another country, and to forget the “old” company. This is not necessarily possible and depends on the circumstances of the existing company such as:

If one or more of these factors apply, it is probably worth assessing the possibility of re-domiciling your company. If not, it will be more cost effective to simply close the “old” company and set up a new one in the jurisdiction you elected.

How to re-domicile your company to Mauritius?

The corporate re-domiciliation procedure may differ from country to country. Generally, it will involve the following steps: 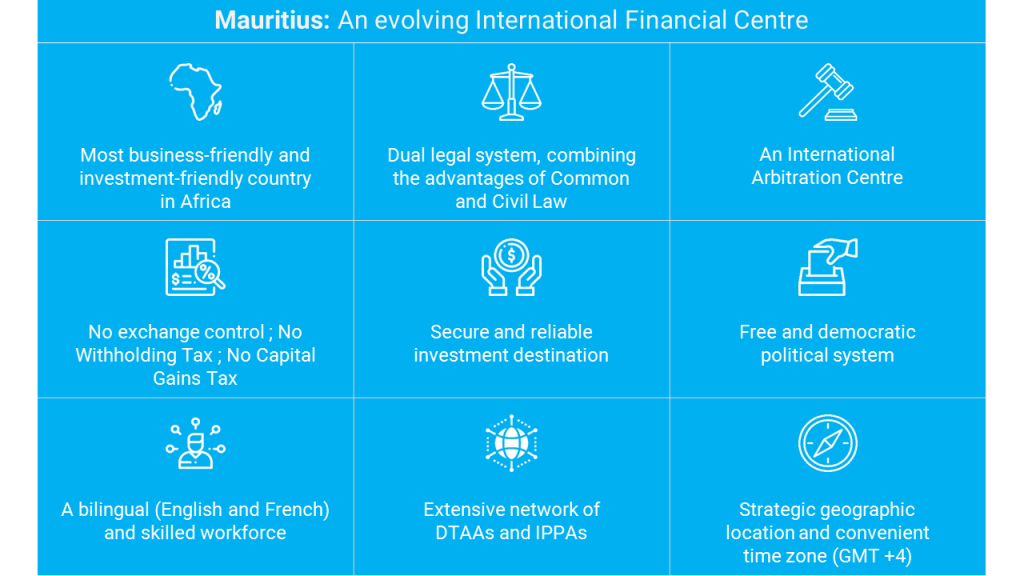 There are various reasons why you would want to re-domicile your company to Mauritius. The island nation’s has a diversified economy, a stable political environment, and a well-regulated and transparent International Financial Centre. It also boasts a simple and effective tax system, good technology infrastructure, an educated work force and good road networks.

International indexes also rank Mauritius first in Africa on many aspects. Most notably for the ease of doing business (20th internationally on the World Bank’s ‘Ease of Doing Business’ ranking) or the Ibrahim Index of African Governance (IIAG). Furthermore, in its recent ‘Best Countries for Business 2019’ report, Forbes ranks Mauritius 39th globally, 1st in Africa for business.

In addition, Mauritius has a wide network of Double Taxation Avoidance Agreements (DTAAs) and Investments Promotion and Protection Agreements (IPPAs) with other jurisdictions. This clearly demonstrating that the Mauritian ecosystem is favourable for companies that wish to do business globally.

Mauritius also allows the re-domiciliation of other corporate structures such as foundations, trusts, and funds amongst others. Furthermore, there is no exchange control nor capital gains tax or withholding taxes on royalties and dividends.