Authorised Company in Mauritius – All you need to know

During his 2018/2019 Budget Speech on 14th June 2018, Hon. Pravind Kumar Jugnauth, Prime Minister and Minister of Finance and Economic Development, presented the reforms to the Global Business sector. These reforms, which have since been put in place, support and strengthen the sector while ensuring the Mauritian jurisdiction complies with international standards (especially OECD’s BEPS Action Plan). The sector has seen the creation of the Authorised Company Licence.

What is an Authorised Company?

The Authorised Company Licence is delivered by the FSC. It is a new category of company whose business activities and Place of Effective Management are outside of Mauritius. With its Place of Effective Management abroad, an Authorised Company is considered as a foreign company for tax purposes. This type of company does not have access to the Double Tax Avoidance Agreements network of Mauritius.

What are the requirements for an Authorised Company to establish in Mauritius?

To set up an Authorised Company in Mauritius, it is required that the company’s (other than a bank) majority of shares, rights to vote, legal or beneficial interest are detained or controlled by a person or a group of people who are not Mauritian citizens.

An Authorised Company is also required to appoint a registered agent in Mauritius. Management Companies are specifically commissioned to act as permanently-registered agent, and are responsible for the administration of the company. Their duties towards these companies include:

If a company, incorporated in Mauritius, does not meet the above-mentioned conditions, it will be considered as non-resident.

What kind of activities is an Authorised Company able to carry out?

However, as outlined in the Fourth Schedule to the Financial Services Act 2007, Authorised Companies are not allowed to perform the following activities:

Authorised companies are also prohibited to carry out any other activities that may damage reputation of Mauritius as an International Financial Centre (as determined by the FSC), or contrary to public interest.

Mauritius: the preferred destination for Global Business and investment funds

By means of its good corporate governance, hybrid and strong legal (civil law and common law) system, robust regulatory framework, social and political stability as well as diversified economy and culture, Mauritius’ global reputation has grown over the past decade. The island, through its strategic location in the Indian Ocean between Africa and Asia, is today the preferred jurisdiction for investments into and from Africa.

International indexes rank Mauritius first among African countries in several areas, including ease of doing business, good governance, economic freedom, political and social stability and ICT development. Strict ‘Anti-Money Laundering/Combating the Financing of Terrorism’ (AML/CFT) laws and the support to international initiatives such as OECD’s BEPS Action Plan and the Financial Action Task Force (FATF-GAFI), reflect the vision of the Mauritian government to promote the country as a transparent International Financial Centre, that does not only attracts capital flows, but ensures the security of assets.

Mauritius also has an extensive network of treaties, having concluded 50 Double Taxation Avoidance Agreements (DTAAs) and 45 Investment Promotion and Protection Agreements (IPPAs) with countries around the globe. It clearly shows that Mauritius boasts a favourable ecosystem for companies looking to do business at an international level. The island nation also forms part of several international communities, including the Common Market for Eastern and Southern Africa (COMESA), the Southern African Development Community (SADC), the Indian-Ocean Rim Association (IORA), the African Growth and Opportunity Act (AGOA), and the Indian Ocean Commission (COI). 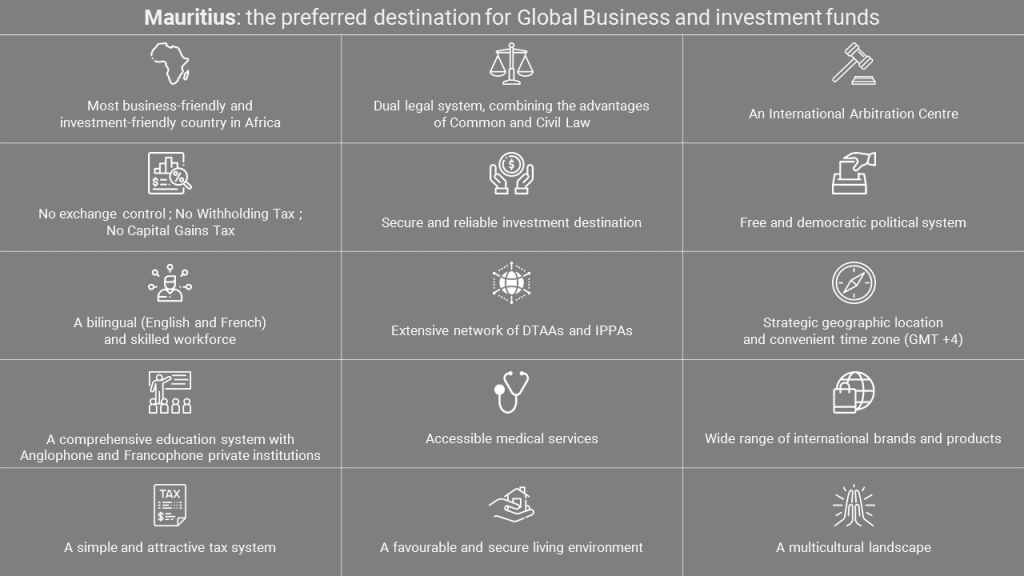